Looking for a way on how to record Skype calls? Fortunately, Skype now has a native recording feature. It’s time to ditch the third party Skype recorders. 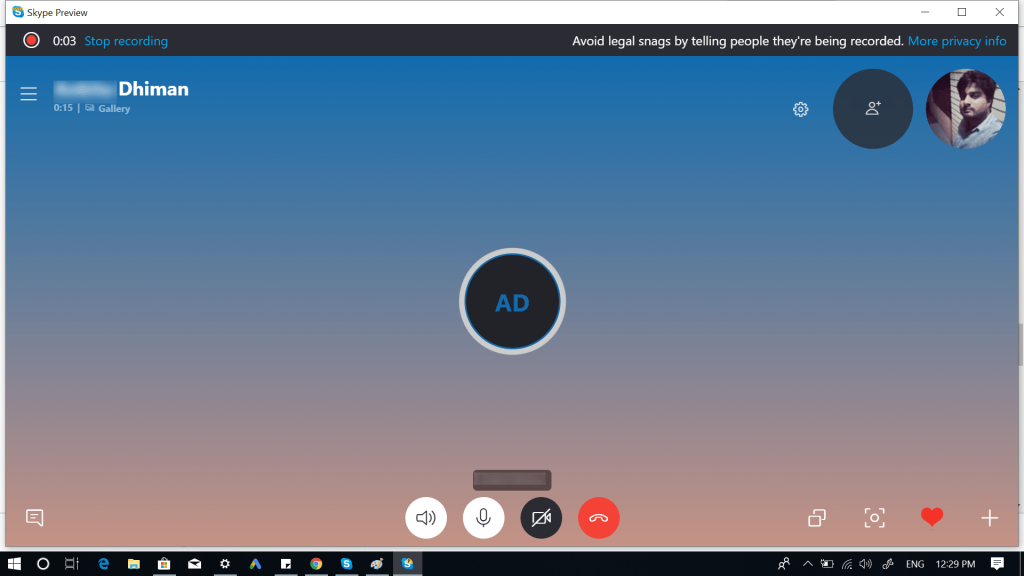 Skype is people’s choice when it comes to making videos calls, both professional and personal for around 15 years. It was acquired by the Microsoft some time ago. It has lots of useful features that help in making conversation easy.

Call Recording feature was a most anticipated feature of Skype. Fortunately, the company has finally introduced it around 15 years after it was launched. The native call recording feature is implemented on various version of the Skype app and let user record both voice and video calls

That means, there is no need to take help of the third party skype recorder to record calls.

Skype’s Call Recording feature is cloud-based and let users access call recording across the devices including Windows, Mac, Android, iOS, and even the Linux.

Some users might not find this call recording feature handy as it’s against their privacy. For backing this thing, the company mentioned in the announcement post that, whenever you or your friend start call recording, everyone in the call will get the notification that your call is being recorded. Fair right?

How to Record Calls in Skype

Currently, Skype’s Call recording feature is available on Skype for Mac, Android, and iOS. The windows users have to wait a few more days to get the functionality.

Since I have enrolled for Skype beta version, I will show you how Skype’s call recording feature works on Windows 10.

Note: Before start using the Skype Call recording feature, it is very important to find out if call recording is legal or illegal in your area. No doubt, the native feature will send a notification to all users in the call that your call is being recorded, but notification solely is not enough to make something legal.

1. Launch Skype on your Windows 10 or Mac

2. Choose the Contact to whom you want to call. You can record both Audio and Video calls. It is your wish what call time you want to record.

On Windows and Mac PC

Click on the + (Plus) icon available on the bottom right corner. This will open the quick menu; here you need to select ‘Start Recording‘ option.

On Android and iOS Phone

Tap on the + (Plus) icon available at Center bottom of the screen. Next, Tap on the ‘Start recording‘ icon.

4. Once you start recording, you will see the banner at the top with a message which reads “Avoid legal snags by telling people they’re being recorded.”

On Windows and Mac 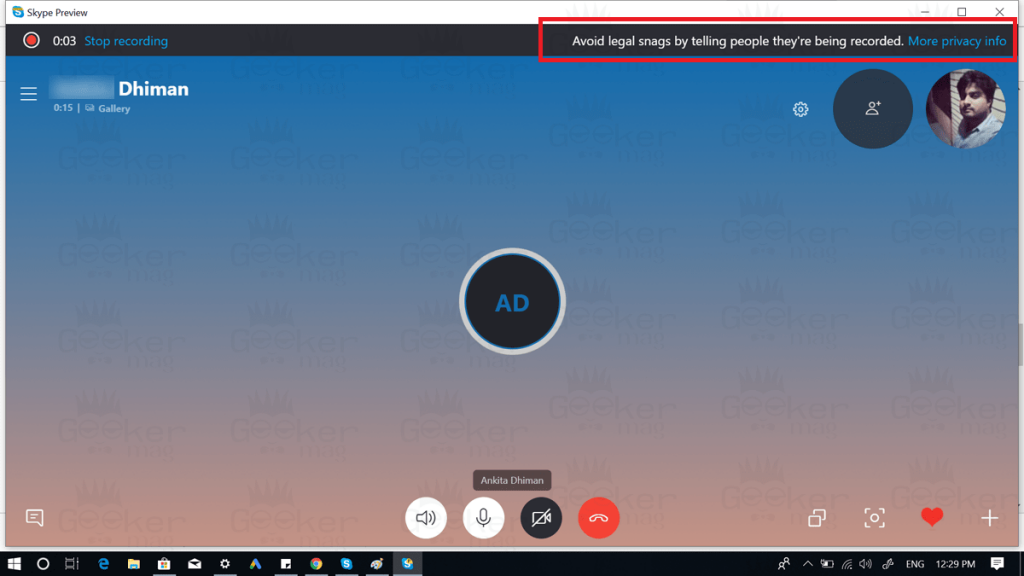 On Android and iOS 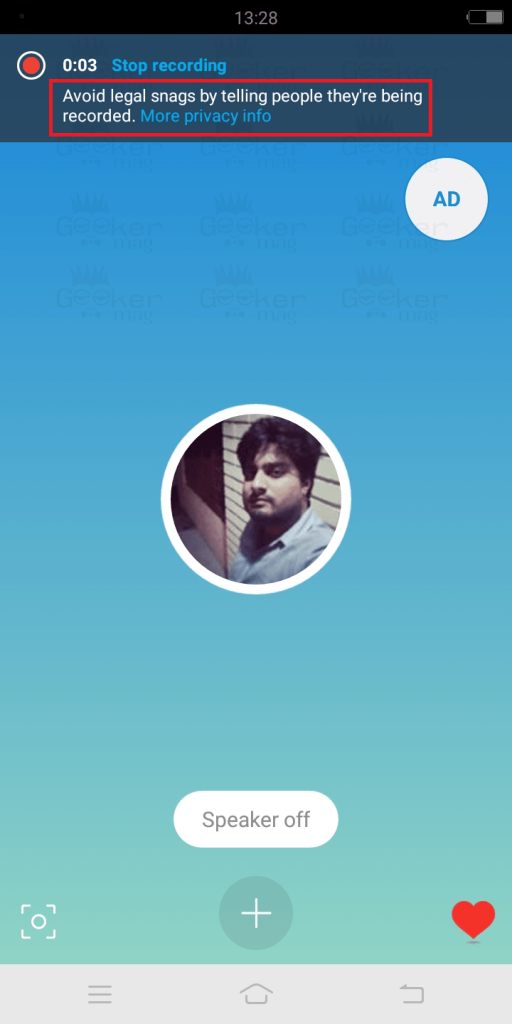 While on the other side, all the people in the call will see a banner telling that you’re recording this call. Suppose I’m calling my friend and I have started recording the call, then they will see a message ‘Viney is recording.’ Check out the screenshot for a clear idea:

For Windows and Mac 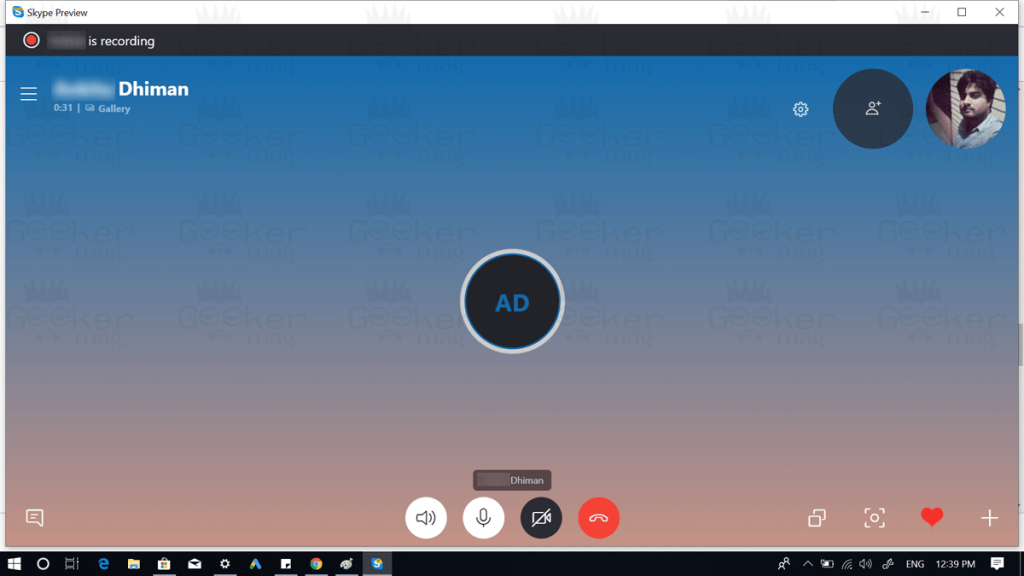 For Android and iOS 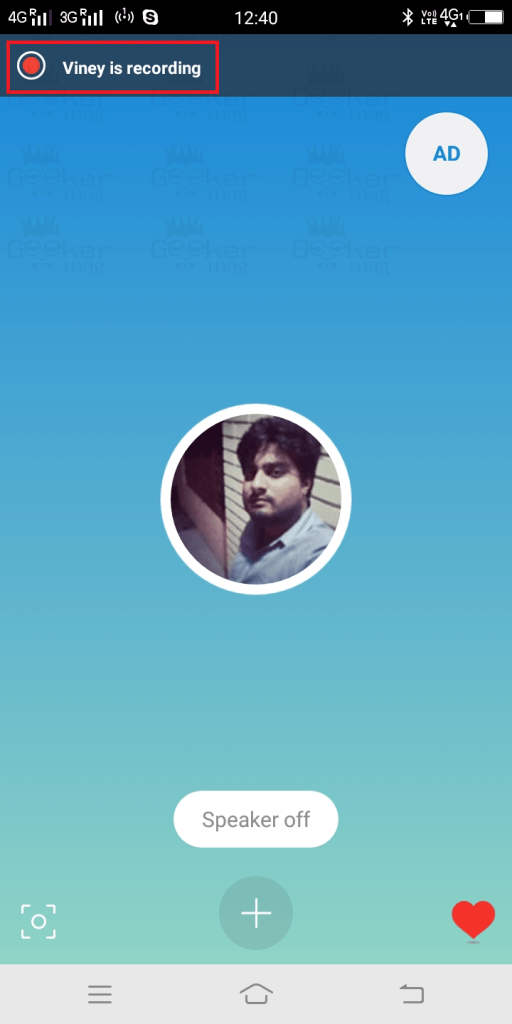 Once you stop recording the call, it will be finalized and then posted on your chat window. The recording call (whether it is video or call) will be available for 30 days.

In the chat window, right click on the recording call and from the menu select: 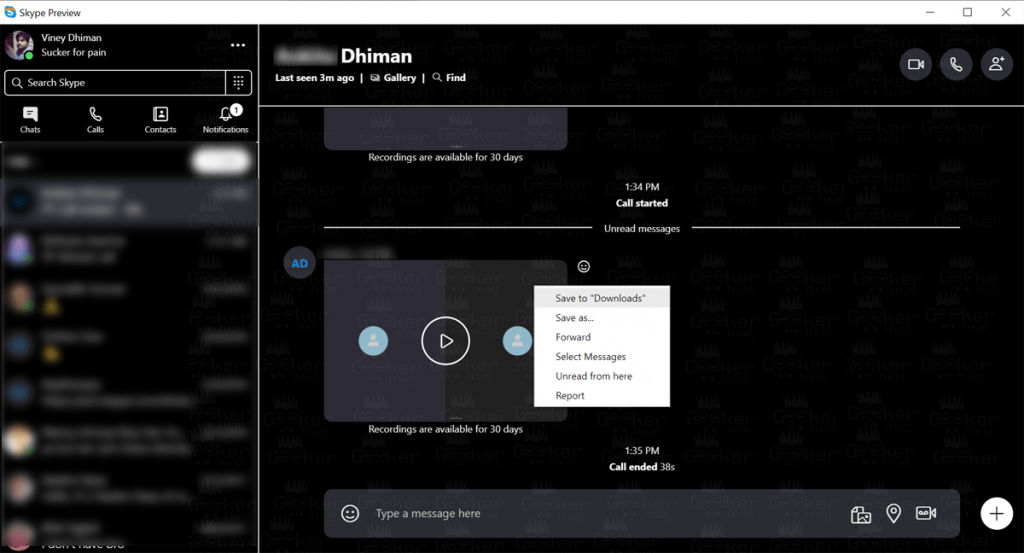 On your phone, you need to long tap on the call recording, and select Save from the context menu. 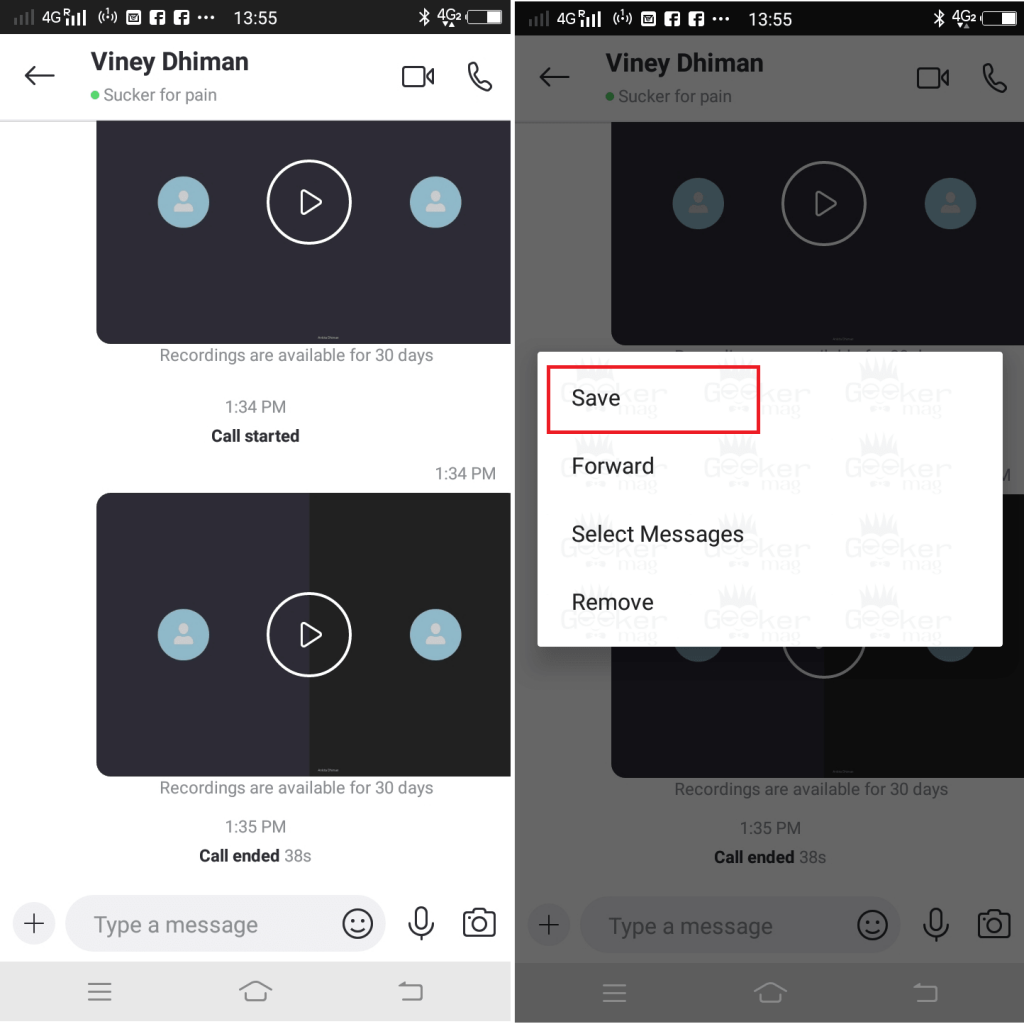 Forward Recording to your friends (Windows and Mac)

In the chat window, right click on the recording call and from the menu select Foward.

This will open the Foward dialbox showing you the list of friends. Here type the message which you want to send with the message and click on the Send button next to the name of a friend.

On the phone, long tap on the recording and select Forward from the menu. 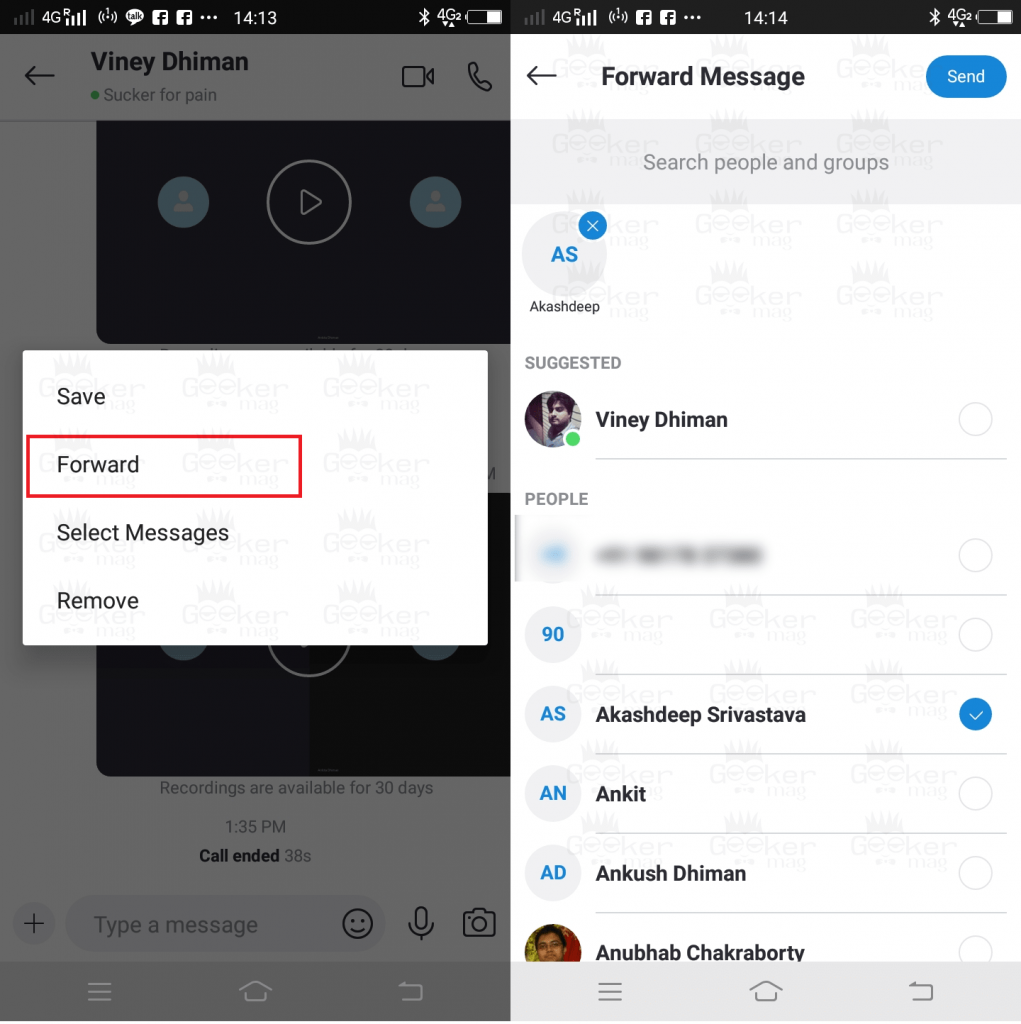 In the next screen, choose the friend to whom you want to send the recording and tap on the Send button available on the upper right corner.