Is Facebook Messenger Down right now? This is what you want to find out? In this blog post, I will guide you steps on how to find out.

Facebook Messenger is a popular instant messaging used by people in every part of the world. Sometimes while using the app on the phone, you might notice that app is behaving abnormally. Usually, it happens because of the bug which can be fixed just by following a few steps.

While in individual cases, users face this issue because Facebook Messenger is down. Now you might be wondering what is this down thing, and how to find out if the messenger is down?

Usually, service is down when the company is updating service, or some bug hit the app and the backend team working to fix the issue.

There is a nifty web service named as DownDetector that gives information about service experiencing the issue.  You can visit this web page to find out if Facebook Messenger is down. 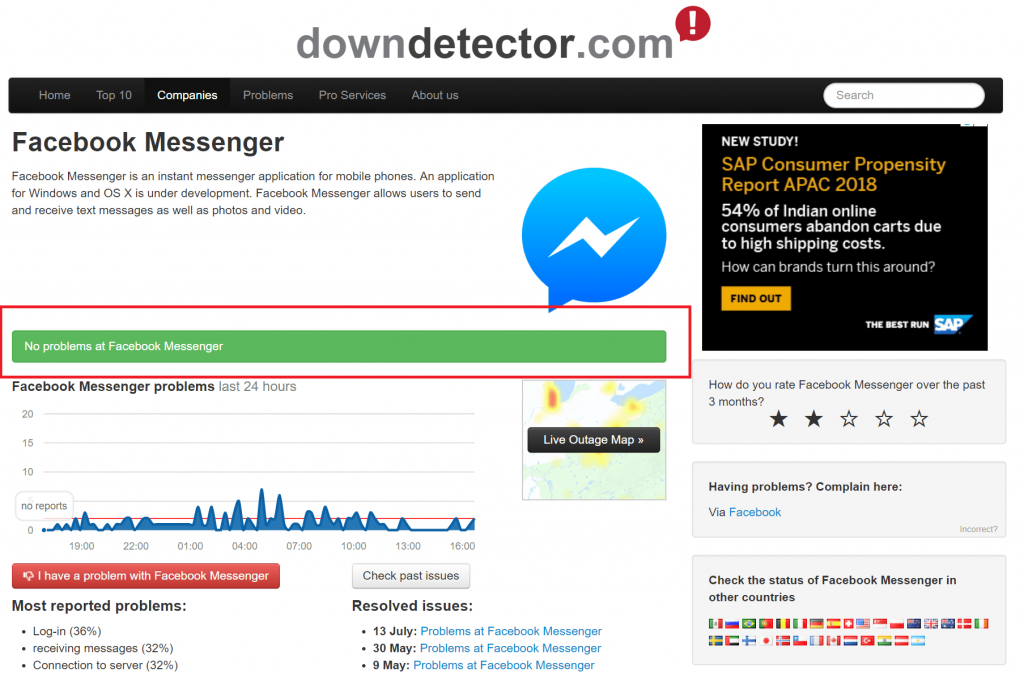 If service is running fine, then you will see the status that “No problems at Facebook Messenger.” Apart from that, you can also find information about Most reported problems and Issued resolved in the past.

In case, the service is showing the green flag for Messenger, but still, it is not working fine on your phone, then there is a bug causing the issue which you need to fix manually. Following are the steps which you can employ to troubleshoot and fix the problem:

Most of the issues related to phone and apps are fixed just by doing a quick reboot. So before doing anything else, reboot your phone and check if this fixes the issue.

Installing the latest update also fixes the problems. All you need to do is to head over to Google Play store or Apple app store and find if the company releases any latest update for the service. If the update is available, download and install it.

Now check if this fixes the issue.

3. Clear Cache (For Android only)

The good thing about the Android operating system is that if offer users full control over Android settings and features. Cache Clearing is one of the popular features of Android phones. By clearing the cache of particular app users can fix most of the issues.

You can also a clear cache of Messenger app to fix the issues. For that, you need to head over to Settings -> Application -> Messenger. Here on this page Clear the cache.

After that, remove the Messenger app from the recent app and relaunch it. Probably this fixes the issues.

4. Uninstall and Reinstalled the app

This is another good way to fix the problems related to the Messenger app is to uninstall the app from the phone and reinstall it.

Uninstalling the app is not a bad option because no data will be deleted during this uninstalling and reinstalling process.

This method is worth trying.

Lots of users shared on the internet that most of the time, when a standard version of Messenger app was down, the lite version of the same app was working fine.

So you can also use Messenger lite for the time until the regular Messenger app starts working properly.

In case, the issue is serious and nothing discussed above fixed the issue, then in this situation, you can access Messenger web version to get connected with your friends.

You have other methods you used to troubleshoot Facebook Messenger issue? Feel free to share in the comments.

Be the first to get blog updates
https://t.me/geekermag
Copyright © 2020 GeekerMag